MEN are fixing their man-boobs at a record rate, according to Stonnington’s largest cosmetic surgery, The Ashley Centre.

The cosmetic and elective surgery clinic in Burke Road, Malvern East, has recorded a 50 per cent increase in men presenting for gynaecomastia surgery in the past five years and an average 20 per cent yearly increase.

Gynaecomastia, or “man-boob surgery” is treated using either liposuction or reconstructive cosmetic surgery.

But according to The Ashley Centre’s head cosmetic surgeon, Dr Ashley Granot, the centre has seen a significant weekly increase in men presenting for gynaecomastia procedures.

“Each week I treat up to three men for gynaecomastia. Five to seven years ago, I would have only seen one every six weeks.”

Currently, gynaecomastia procedures attract a rebate ranging from $346 to $505.

Of the claims relating to gynaecomastia procedures, liposuction claims rose 41 per cent from 142 claims in 2007-08 to more than 200 last year. 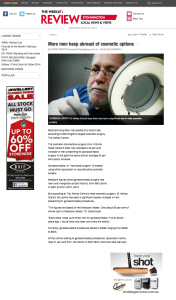 Read the full article at: The Weekly Review

Home In the media Man Boobs – The Weekly Review

Please provide your details below and we will email you this brochure.

NOTE: We may contact you to discuss and provide more information about this booklet.

need to contact the me clinic? choose from any of the options below:

A personalised one on one video or phone consultation with one of our experienced surgeons or cosmetic physicians.

Welcome to Me Clinic

Please leave a message and we'll get back to you.

A personalised one on one video or phone consultation with one of our experienced surgeons or cosmetic physicians.